frustrated but not stopping!:) 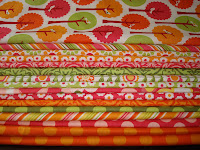 here are some fabrics that i can't wait to get my hands on. i bought them last summer when i was at the fabric shack and i just couldn't figure out the right pattern. well i think i found it!!! that is really exciting. the hard thing is i'm having trouble with my machine AGAIN!! but even though i'm frustrated i know that i can cut out this quilt and figure some things out like the size and all that good stuff. if i knew my machine a little better i'd probably know the problem right away. i misplaced the manual (yikes!!!) and so now i have to go online and try to find the manual. i'm not good at the putzy stuff like that.

anywho - i'm going to use this pattern!!! i love the raw edges. i've only done one raw edge quilt and i gave it away. this should be fun cuz it's been awhile. i love the colors and think i will throw some white in there. i love what white does to bright colors. i think i will find some other solids also. so that's the plan even though i can't sew it yet!

hope you are doing well and enjoy your day!!!
Posted by heather at 11:52 AM 5 comments:

Warning this posting is long cuz it's been awhile :)

because of computer issues and work (it can cramp your style :)) i've not posted in awhile so this might be rather long. 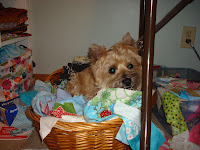 ruby!! she is a honey. she loves my scrap bin. that basket was originally intended for her but she used to chew the basket part so i took it and used it for scraps. she has recently found the basket again and this is were i'll find her certain times of the day. she is too cute to me!!!
projects i've been working on: 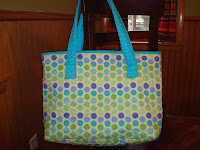 i was in the mood last weekend to make a bag. that is not usual for me. but i've had this polka dot fabric for at least a year and thought it would make a fun bag and i think it did. i love the bright handles. i quilted the outside and inside. i've never done that before but i really like the look. 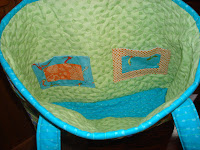 this is the inside and if i really wanted to i could reverse it and use the inside as an outside. the handles would be a little weird but still do-able. it's a very fun tote bag!!

next - i finished my nieces quilt. it's the barn raising pattern with a bright twist!! she just got it and told me she loved it. i was happy to hear it. it's nerve wracking making a quilt for someone when they say oh we'll just like anything you do. what if you don't though???? everyone has different styles - doesn't mean they are wrong they just aren't yours. :) 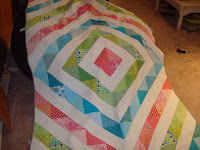 this is the back. NEON green and a paisley boarder. it fits her twin size bed. 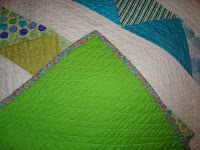 the most tedious project i've done in awhile. LOVE the results but there were A LOT of rows!!! :) i got the idea from aimee. thanks dear!! 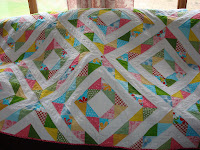 for the quilting i did a straight line and just traced the patterns. LOVE how it turned out! 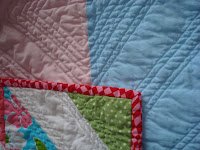 the back was just fabric i had. i've been doing that as much as i can to try and get rid of some of this fabric that i've had for two three years now. i want more but them i think why i've got so much already. the only time i buy is when i don't have enough of the same colors to make it work. 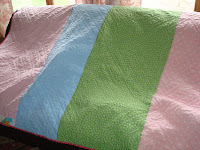 the charity quilt. this is one of my favs!!! i love the film strip quilt. i could make 100 of these and make them all different. i have a new idea with this quilt that i'm going to try soon. amanda is the inventor of this quilt. (i think) :) 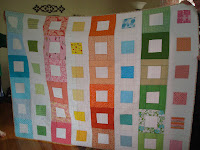 the back. once again what i had. but it worked. and i met the lady who bought it and she was so very happy. it was fun to see! 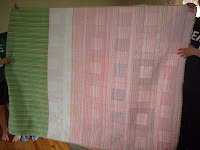 well - summer is almost here and i look forward to some more time quilting. i have a lady that i'll be working with this summer who wants to learn more about quilting. it should be VERY fun. she is staying on me to do this so i know she is really interested. i'll update you on her progress! ;) hope you are doing well. thanks for putting up with two months of projects basically. have a great day!!!

heather
I'm a stay at home mom who has just found a hobby that I love. I love fabric and therefore want to create using it. I love to quilt and make bags or purses and other little odds and ends. I've pretty much gone off the deep end! But it sure is fun.